Why Do Basketball Players Wipe The Bottom Of Their Shoes? You’re watching a basketball game and you see players wipe the bottom of their shoes. Does that sound familiar? It’s coming back to you now, isn’t it?

So, you see that often and you still have not been able to figure out why they do that, well, you are not alone.

At first, we thought this was just another sports ritual that some players believed brought them good luck. But well, that is actually very far from the reason.

It turns out that we were wrong and there are actually valid reasons why these players wipe the bottom of their basketball shoes. We believed it to be an interesting fact and decided that it needed to be shared with you.

The major reason why basketball players wipe their shoes is to have a better grip on the basketball court while they play, and if you come with us, you will understand this better.

This might sound a little funny to you but it actually isn’t. Basketball players perform better when they put on shoes with excellent grip.

Shoes without a good grip make swift movements on the court very difficult to do. And this also increases the tendency for players to slip and sustain injuries.

Thinking of that alone will limit the performance of that player. Therefore, in order to avoid the buildup of the basketball court’s dust and dirt under the soles of their basketball shoes and cause them such problems, it is only logical that they find a way to wipe the bottom of their sneakers.

Watch this video to see what can happen when b-ball players go a long time without wiping their shoes.

Some players simply spit on their palms and use it to wipe the bottom of their basketball shoes while some just rub at the sole of their shoes with their hands directly.

Now, do you understand why these players go as far as wiping the bottom of their basketball shoes with their hands? Yes, it’s pretty unhygienic, but it’s a small price to pay for a big win.

Don’t be surprised the next time you see your favorite basketball player using sweat from his forehead to wipe the bottom of his shoes.

There are other ways to get this done, though. Some players actually go off the court to wipe their shoes with a piece of cloth, but you have got to admit that this is quite more time consuming than simply using one’s palms to get the job done.

Being able to reach both ends of the court as quickly as possible is very important for a basketball player.

However, when their shoes have gathered dust and debris under them, it makes it very difficult for the basketball player to be where they are needed in time. And this is because their shoes will slip and slide on the court, as you saw in that video earlier in the article.

The goal is to make goal-scoring goals moves on the court, not dance moves.

Defence Relies On It

Every time a basketball player tries to block or bar an opponent during a game, it is easily noticeable how they fully brace themselves with their feet locked to the floor of the court.

This isn’t some sort of sorcery, it is simply the work of a good shoe grip. Wiping the bottom of their sneakers, helps basketball players play their defense roles better without the fear of slipping or messing up the game.

Nobody goes to a basketball game just to watch grown, sweaty men run across the basketball court for 4 quarters, everyone wants to see some awesome points being score.

Failure to wipe the bottom of their basketball shoes can cost players what they really covert; goals.

No one wants to slip right before throwing a layup. It is also important for the sake of the fans who are watching the games, that players wipe the bottom of their basketball shoes, to enable them to score every single one of those points needed for a win.

You Can’t Show Off Your Moves With Bad Grip

Becoming a basketball star doesn’t just revolve around how tall you are and how much hoops you can shoot. You also need to have a little bit of dazzle, too. Make the crowd go wild when even you burst a move.

We all like it when our favorite basketball athlete displays an awesome move and gives us the “ooooh” moment.

Well, that won’t be possible if they don’t wipe the bottom of their kicks, because those sudden stops in the dribble can result in a slip and potential injury.

Why? You may ask. Using a pair of basketball shoes with a weak grip can cause a player to be unable to use most of his techniques; imagine LeBron James not being able to use his “Fear of God” Spin Counter just because he didn’t wipe his shoes, that would really suck.

So, don’t blame LeBron when you see him wipe the bottom of his shoes.

Some Pieces Of Advice

If you happen to be a basketball player, and you regularly wipe the bottom of shoes with your hands, we have got a few tips for you to properly clean the bottom of your shoes in a hygienic way. Here they are: 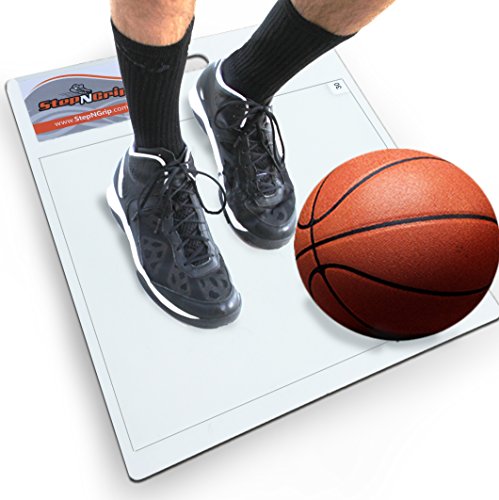 Click here to check out this sticky mat and buy on Amazon.

Now that we know why these basketball players wipe the bottom of their shoes, it is easier to accept that it’s just part of the game and they are not weirdos with no regard for proper hygiene.

Now, you can watch each game and also share some of this knowledge with your buddies.

How To Get Grip On Basketball Shoes — 5 Great Tips

What Are Basketball Shoes Made Of?

We have affiliate relationships with the providers (Amazon, Clickbank, etc) of the products, goods and services that are linked to on this page and may be compensated when you buy. But do note that it doesn't increase the cost of the products to you in any way or determine our verdict on a product/service.

We use cookies on our website to give you the most relevant experience by remembering your preferences and repeat visits. By clicking “Accept All”, you consent to the use of ALL the cookies. However, you may visit "Cookie Settings" to provide a controlled consent.
Cookie SettingsAccept All
Manage consent

This website uses cookies to improve your experience while you navigate through the website. Out of these cookies, the cookies that are categorized as necessary are stored on your browser as they are essential for the working of basic functionalities of the website. We also use third-party cookies that help us analyze and understand how you use this website. These cookies will be stored in your browser only with your consent. You also have the option to opt-out of these cookies. But opting out of some of these cookies may have an effect on your browsing experience.
Necessary Always Enabled
Necessary cookies are absolutely essential for the website to function properly. This category only includes cookies that ensures basic functionalities and security features of the website. These cookies do not store any personal information.
Non-necessary
Any cookies that may not be particularly necessary for the website to function and is used specifically to collect user personal data via analytics, ads, other embedded contents are termed as non-necessary cookies. It is mandatory to procure user consent prior to running these cookies on your website.
SAVE & ACCEPT